I found today that my Linisteppers have the wrong transistors, which prevents them from regulating current properly. At 24v they were pushing enough power to bring my motors up to 240F. Rather than continue experimenting with the linisteppers I decided to set up with the Pololu drivers. When I get the right parts into the linisteppers I’ll swap them back and compare performance.

While I’m taking the machine apart to swap motors, I figured I’d run a tap down the lead screws to clean up some rough spots that were causing lost steps. There was a particularly bad spot on the X axis that it would barely get past.

It will be interesting to see how this affects the movement. 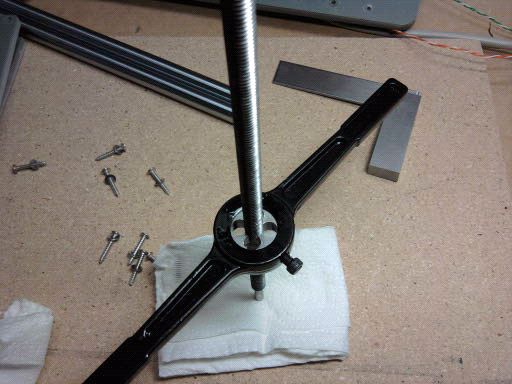 Edit: Completely tearing down the machine and reassembling it ended up taking about 10 hours. I ran a die over 2 of the lead screws and a tap through the brass nuts. This has made the movement much smoother.
I also found that the linear bearings were not aligned as straight as possible, so that while they would run, they were binding as the balls circulated. I reseated a couple of them which improved the situation, most of them would run very nicely.
I did find that some of the PVC pieces that the linear bearings mount into did not have square edges. When screwed down they wanted to sit at an angle, which put the linear bearings out of alignment. I just ran them over some sandpaper to take down the edge, and they now sit straight. This seems to have smoothed out the rest of the motion in the linear bearings, all but one run pretty nicely now, and that last one isn’t bad enough to make me want to do anything with it.
I’ve got all the motors mounted and everything squared up, next I’ll have to wire up the Pololu drivers and get them stuck to a heatsink.