Skip to content
For the sand casting demo for the Omaha Maker Group, I picked up some beads at Hobby Lobby to use as patterns. I thought that since these were convex they would make for an easier demo than the glass dish I used in my first attempt. These turned out to be pretty good patterns. 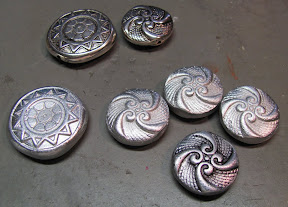 The two at the top are the original metal-finished plastic beads, the rest are my zinc castings. You can see on the larger casting on left that I had insufficient metal coming in to avoid a little bit of a shrinkage cavity at the top. The four smaller castings at the right were done in one pour. They came out better, with somewhat less shrinkage, but I didn’t do quite as nice of a job of packing the sand, so the surface finish wasn’t quite as nice. I took the best one and colored it with a sharpie and then polished it with a rag to remove the ink from the high points.
Casting these was pretty much like any other simple casting, nothing much to say about the process. For the demo I did a pretty rushed job of making the mold, so the results were fairly low quality, but the pour went well.